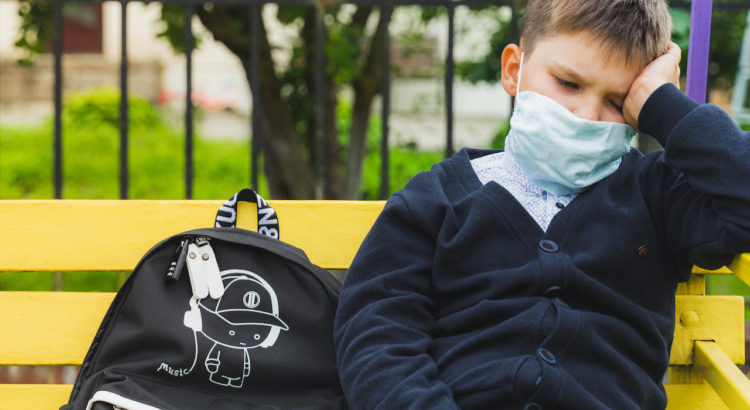 Masking is not normal and should not be normalised

In the week when the requirement (or is it only a ‘recommendation’?) to mask children in the classroom was reinstated, it is worthwhile to consider the likely reasons underpinning the decision to return to a restriction that is both ineffective and harmful. Undoubtedly, there has again been pressure from the education unions for pupils to cover their faces, motivated either by a baseless belief that such a measure will reduce the risk of teachers contracting the virus, or perhaps a desire to further damage Government credibility by causing more disruption in our schools. Whatever their reason, at this juncture it is timely to revisit the range of circumstantial evidence that supports what HART believes to be the most plausible reason for compelling the healthy to wear face coverings: to increase compliance with future COVID-19 restrictions and the vaccination rollout.

Prior to June 2020, public health experts did not endorse masking healthy people in the community as a means of reducing viral transmission. In March 2020, Dr Jenny Harris (England’s Deputy Chief Medical Officer) was unequivocal when she stated, ‘For the average member of the public, masks are really not a good idea’ and that ‘People can put themselves at more risk than less’. North of the border, Professor Jason Leitch (Scotland’s Clinical Director) was equally emphatic when – in April 2020 – he said, ‘The global evidence is masks in the general population don’t work’. Strikingly, in December 2020 – several months after mask mandates had been imposed in the UK – the World Health Organisation (WHO) published a document titled, Mask use in the context of COVID-19 that formed the conclusion that, ‘There is only limited and inconsistent scientific evidence to support the effectiveness of masking healthy people in the community’. Many contemporary public figures spread a similar message.

So what changed in 2020 that flipped the public health experts into a pro-mask narrative?

One thing is clear: it was not in response to the advent of robust scientific evidence showing that face coverings significantly reduce viral transmission. On the contrary, a review of 14 controlled studies, published in May 2020, concluded that masks did not significantly lessen the spread of influenza in the community, protecting neither the wearer nor others. Although it is not possible to draw an unequivocal conclusion about the reason for the volte-face, several factors are consistent with masks being deployed primarily to enhance compliance with the Government’s COVID-19 interventions.

Deborah Cohen, a medically-qualified correspondent working for the BBC Newsnight programme, stated (in July 2020) that various sources had informed her that the WHO had recommended masks in response to political lobbying, and when she put this possibility directly to the WHO they did not deny it. Also, in her book, A State of Fear, Laura Dodsworth interviewed Gavin Morgan – an educational psychologist and member of the SPI-B (the behavioural science subgroup of SAGE) – who told her that his antipathy to masks had been nullified by some colleagues in the group who believed they were useful in promoting a sense of ‘solidarity’, strengthening people’s feelings of cohesion in the collective fight against the virus.

Further support for the compliance explanation derives from an examination of the activities of the Government’s behavioural scientists who, throughout the pandemic, have recommended the use of covert psychological ‘nudges’ as a means of promoting people’s acceptance of COVID-19 restrictions and the subsequent vaccine rollout. Masking healthy people (adults and children) significantly enhances two fundamental ‘nudges’ used within this campaign. First, the exploitation of fear to promote compliance with Government diktats has been well documented. Masking people in community settings, as well as being one of the restrictions fuelled by fear, is also a powerful way of perpetuating fear. Acting as a crude reminder that danger is – purportedly – all around, face coverings will also prevent disconfirmation of anxious beliefs, preventing the wearer from concluding that our communities are now safe enough to re-engage with in a normal way. A self-reinforcing restriction; something that would strongly appeal to our ethically-compromised behavioural scientists.

Second, the awareness of ‘norms’ – the prevalent views and behaviour of our fellow citizens – can exert pressure on us all to conform, and this widely-deployed ‘nudge’ is also greatly strengthened by mask wearing. Normative pressure (otherwise known as peer pressure or scapegoating) is less effective in changing the behaviour of the deviant minority if there is no visible indicator of pro-social compliance rooted in communities. A face covering, or lack of one, enables instant recognition of the rule followers and rule breakers, thereby escalating the pressure to comply.

These observations as a whole are consistent with the premise that masking healthy people is primarily a compliance device. Clearly, widespread wearing of face coverings in community settings is an effective way of keeping the British public on board with any future restrictions the state decides to impose in pursuit of its agenda. Would the Government have so easily capitulated to union pressure to re-mask children in the classroom if this was not so?