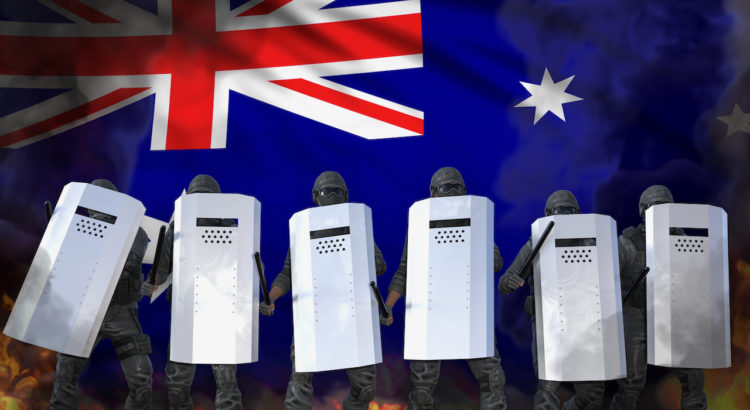 Radio silence from mainstream media about the situation Down Under

Australia is now officially a society that is sanctioning medical apartheid. Businesses in NSW are now being encouraged to tell customers that only vaccinated individuals will be served in their premises. Meanwhile, Victoria won’t allow people to work without a jab, and continues its regime of police brutality and human rights abuses for those protesting these mandates. On Friday 8 October, Acting Senior Sergeant Krystle Mitchell quit her position with Victoria Police, stating ‘I can’t remedy in my soul anymore how the organisation I love is being used… and the damage it’s causing in the reputation of Victoria police and the damage that it’s causing in the community.’ None of this is being adequately reported by mainstream media throughout the world.

The only country that has come out against these atrocities publicly is Poland, where MPs from the Confederation of Freedom and Independence Party gave an address outside the Australian Embassy in Warsaw, repeatedly calling Australia’s regime exactly what it is: Totalitarianism.

This is something Poland has a recent history of. Only 40 years ago — after years of activism against communism led by trade unionists in the Lenin Dockyards in Gdansk and the founding of Solidarity by Lech Walesa — martial law was imposed in Poland. There followed years of brutal repression, yet freedom did not die and in 1990 Walesa led Solidarity to election victory.

Have we forgotten these lessons from history?

It is well worth watching the entire address. The Polish MPs state that Australia has contracted ‘COVID madness’, which seems very apt. They demand that Australia stops the draconian practices immediately, saying ‘we do not want Melbourne in Warsaw.’ They ‘remain ready to rush with help of legal aid and perhaps the evacuation of Polish citizens’.  When politicians from a country with such a long history of resistance to totalitarian oppression stand up to say this, the rest of the world should jump to attention.

Instead, there has been an eerie radio silence.

The situation in Victoria is particularly shocking. Dan Andrews, whose nickname ‘Chairman Dan’ seems more apt by the day, addresses Victorian citizens with a tone normally reserved for naughty five year olds. On 2 October, Andrews, when asked by a journalist what would happen to people who did not want to get vaccinated, simply answered ‘Well they won’t be going to work. It’s very simple. I’m not taking lectures on freedom from people who will hold all of us back’.  He said this, in spite of the increasing evidence that vaccines do not stop you getting or transmitting COVID-19. He went on to say that he was ‘not looking to exempt anyone’. It should also be noted that all links online to Andrews’ original speech have now been censored by Twitter and all other big tech platforms. Odysee was the only platform where the original speech was still visible.

Since the vaccine roll-out, the mortality and case data in Australia is following a concerning trajectory which does not point to efficacy.

The numbers of reported adverse events and deaths following the COVID-19 vaccinations in Australia are also very concerning, with 553 deaths reported following vaccinations in recent months, compared to 1389 COVID-19 deaths since the start of the pandemic.

In previous years almost three quarters of over 65 year olds and more than 60% of the vulnerable received an influenza vaccine. It would be wrong to think this noteworthy effect is just the result of high uptake. Clearly there is something specific to the COVID-19 vaccinations that is causing this large spike in post-vaccine adverse events and deaths.

To mandate injections of novel gene therapies — with no long-term safety data and which have death as a potential side-effect — is plainly immoral. There is no possible scientific justification for this policy. The reluctance of the medical and scientific community to admit this openly is chilling. This jab has somehow taken on qualities of a ‘sacred cow’, which no one dare criticise, regardless of the mounting data.

Protesters in Victoria are being shot with rubber bullets, tear-gassed and brutally beaten by riot police. One policeman even used the butt of his rifle on a completely defenceless citizen who had already fallen to the ground. There have been severe injuries and not one word of it in the press, which mostly just vilifies the protesters, calling them ‘extremists’. Apparently, coming out in support of bodily autonomy and freedom of choice makes you a ‘man-baby Nazi’ according to former Labor leader Bill Shorten. In any normal circumstances, this behaviour in a so-called democracy would invoke sanctions by other countries. Why is this not happening? Most people in the UK have no idea about the situation in Australia. What has become of Western Democracy when this can take place without comment from the UK press?

Meanwhile, stories of corruption from the politicians enforcing these draconian measures seem to be leaking out daily. First Gladys Berejiklian resigns due to a corruption investigation and her relationship with a former MP, Daryl Maguire. Then, on October 6, Dan Andrews faced calls to stand down over reports linking him to a corruption probe. Just yesterday, Luke Donnellan resigned from Andrews’ Labour government, accused of branch-stacking at the Independent Broad-based Anti-corruption Commission (IBAC) hearing.

Has Australia fallen to tyranny? Let us hope not. But throughout history, using ‘safety’ as an excuse for such policies and human rights abuses is an all too common hallmark  of evil, and repetition does not make it any less morally and ethically reprehensible.