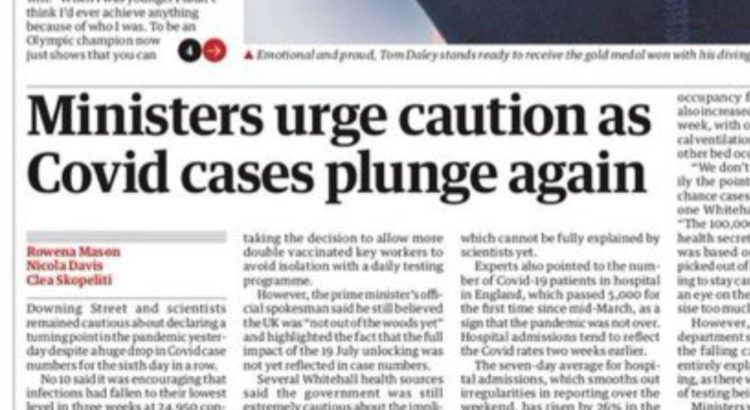 Why are we not celebrating this good news?

Headlines across the press this week declared the fall in cases as confusing, baffling and puzzling. Few headlines acknowledged that it was in fact good news.

Yet again over-simplistic modelling has let us down. Those of us calling out the failed modelling for months have been censored or attacked.

The Ferguson model failed in Summer 2020 when there was no rebound in cases. Numerous studies of global lockdowns have shown that alterations in human behaviour due to lockdowns have had no impact on the trajectory of the pandemic. Many states in the United States returned to normal life as their winter wave declined, with no negative consequences.

Many prominent voices are clearly clinging to the hope that this is merely a temporary blip and that cases will rise again soon, so desperate are they not to be proved wrong.

Rather than predicting everything using theoretical models derived from incorrect assumptions, we could look to real-world data. Scotland saw a peak in cases on 2 July and they have been declining since.  The decline came at a time when Google mobility data showed more human interaction than normal levels, higher than at any other period in the pandemic. Cases in India fell, defying predictions, without a lockdown.

Attempts have been made to blame the recent surge on the UEFA European Football Championships, but cases started falling in Blackburn from 6 June, Oxford on 30 June and kept climbing in Cornwall, Bradford and Leicester until 17 July.

It is human nature to cling to a theory. To admit we are wrong and correct our thinking takes courage. However, science only progresses by being willing to reject disprovable paradigms. Old hypotheses are then replaced by new. History tells us that this process can be difficult. It requires freedom to share ideas and debate, both of which have been shut down since March 2020. President Macron accused people who are against mandatory vaccination of being opposed to the Renaissance: yet he is the one failing to listen to rational objections as well as missing the tragic irony of his feudal top down approach;

“I respect the convictions of each and every one, but I say it to you with a lot of force: we are the nation of the renaissance, we are the nation of Pasteur, the only way out, to protect the oldest, the most vulnerable, to be able to reopen fully … that’s the vaccine. Get vaccinated for yourself, for your parents, and for France.”

The hypothesis that not everyone is susceptible to each variant needs to be embraced. Each winter between 4-15% typically become susceptible to influenza. Despite decades of study, we still do not understand what ingredients influence this seasonal trigger. SARS-CoV-2 appears to reach a peak for each variant after it has found a similar proportion of people to infect. This hypothesis explains why no lifting of restrictions has led to a rebound; why each wave, with each variant, has infected a similar proportion of the population before peaking and why we have seen repeated waves. With influenza, strains (variants) of the same virus return between ten and eleven times before a particular influenza type is replaced by a new one. Critically, everyone is exposed each winter to influenza. It is our immune systems that protect us, not good luck or hiding from human interaction.

COVID-19 may yet have more waves to come. However, accepting that the entire population is not susceptible and that no change in human behaviour has impacted the trajectory of this airborne virus means that our approach to any future wave needs to take these points into consideration. COVID-19 can be a more severe illness than influenza in certain, vulnerable cohorts and so hospitals need properly resourced ITU departments. Shutting schools, destroying businesses and terrifying people, only causes harm.