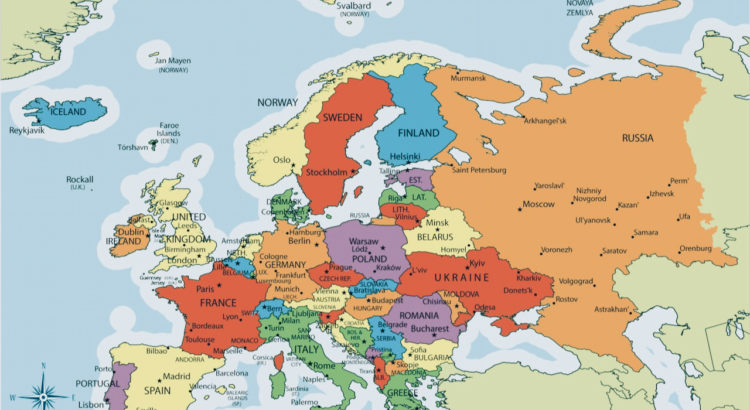 There have been marked differences between the covid trajectories in Eastern and Western Europe; in particular Spring 2020, Spring 2021 and Autumn 2021 showed markedly different death rates (from covid). The low death rate in the UK in Spring 2021 is often held up as a vaccination success story. However, this article analyses the relative contribution that geographical factors may have made to this, in addition to the vaccines.

Claims have been made about a variety of policy interventions, based on comparing countries with differing covid trajectories. For example, in Spring 2020 it was claimed that masks worked in Eastern Europe. By Autumn 2020 however, masks had stopped working. Eastern and Western Europe have been divided for the purposes of this analysis based on the location of each country rather than political boundaries thus:

Regions were further divided into countries according to vaccination rates based on data as at 11th April 2021, when Eastern Europe experienced peak deaths. These groupings remained relevant for the course of the epidemic as, at least for Western and Central Europe, there was little distinction between vaccination rates by 17th November 2021.

Eastern Europe had vaccination rates on 11th April 2021 ranging from zero to 30%. No data was reported from Albania or Bosnia. Romania and Croatia were omitted as they had intermediate vaccination rates of 11%.  For the remaining countries they were grouped into three groups:

Comparing these trajectories shows the death rates were again higher in those countries with higher vaccination rollout as at 11th April 2021. By Autumn 2021, the regions with least vaccination had the earliest wave, but the most vaccinated ultimately experienced a wave of similar magnitude in terms of deaths. Again the cumulative mortality was actually highest in the most vaccinated.

In Central Europe the majority of countries had similar vaccination rates at 16% with the only outliers being Malta, Monaco and San Marino, with rates of 33%. These latter countries have only a small population so extrapolating from them has its limitations, but for completeness the graphs are below. Note that a large part of the difference stems from Spring 2020. From Autumn 2020 until Autumn 2021, the cumulative deaths were similar for both groups before those countries which had had lower vaccination rates overtook death rates.

For completeness, countries in Eastern Europe with low vaccination rates (1.7%) were added. Low vaccination does not appear to have had a negative impact overall on death rates. There will be variables that may bias these results including the proportion of the population who are vulnerable and testing rates. However, in the absence of adjustments for these variables the high death rates that might be expected after only minimal vaccination (with effective products) are not apparent.

To enable a full comparison the cumulative deaths per million for each region are presented by vaccination status on 11th April 2021 in Figure 8.

A final analysis of those countries based on vaccination rates at peak deaths, 17th November 2021, is therefore warranted and is presented below. Two new groups with vaccination rates above 60% and below 40% were analysed. The former included Cyprus, Estonia, Finland, Greece, Hungary, Latvia, Lithuania  (mean 67%) and the latter Albania, Belarus, Bosnia, Bulgaria, Moldova, North Macedonia, Romania, Slovakia, Ukraine (mean 30%). Figure 9 shows how death rates began to deviate from 5th August 2021. Table 2 shows how the vaccination rates for these countries varied over time.

Why was there no significant difference between the 57% and 17% vaccinated countries up until August 2021? Why is the apparent benefit from vaccines seen in Autumn 2021, no longer evident in the last few months?