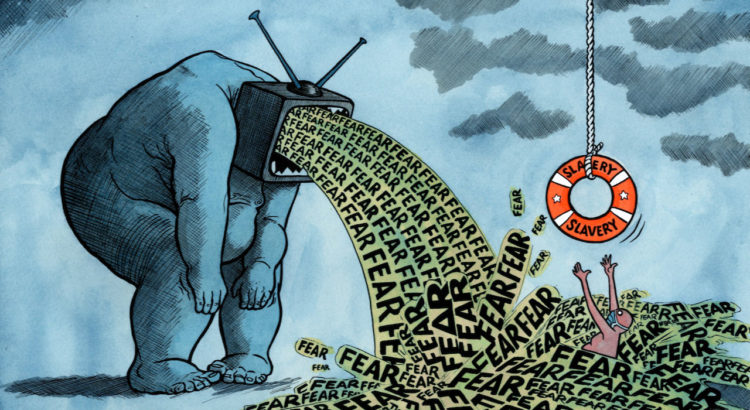 One of the most galling tropes of the UK government Covid response has been that officialdom has been ‘following the science’ to keep everyone ‘safe’.

In fact, what happened here was very similar to elsewhere in the Western world: the narrative was mapped out in advance and insidiously propagated by means of sophisticated propaganda. The scientific method was abused, not used. Inconsistencies were ignored; inconvenient truths were erased; those asking pertinent questions – let alone speaking out with opinions – were simply cancelled. Straightforward lies were presented as the gospel of truth.  The occasional regulatory reprimand was usually well after the event and – of course – not reported on.

The extent of the top-down gaslighting was highlighted in a recent interview by Mark Sherman, a former ITV & Sky executive.  He lays out in stark terms how various checks and balances – vital for the functioning of democracy – were ruthlessly dismantled in March 2020: “it created an environment which led to the biggest assault on freedom of speech and democracy I’ve known in my lifetime”.  In a case of stick (OFCOM’s unbending and draconian instruction to parrot the state’s narrative regardless of the facts) and carrot (massive fear-mongering advertising campaigns at a time when other advertisers were cutting back), open discourse was crushed.

This complicity cost lives and livelihoods. It robbed people of final hours with loved ones. If the broadcast media could have helped the nation see different sides of the various nuanced arguments for and against different courses of action, popular opinion might have favoured the scalpel over a filthy and rusty hacksaw.

The fourth estate is supposedly one of the pillars of Western democracy. It is instructive to read articles on this topic from a ‘BC’ (Before Covid) age: “The hallmark of the fourth estate is that it scrutinises the actions of public officials and political institutions in the interest of the public, serving as a watchdog that holds the other three estates (the legislation, the executive and the judiciary)” and (in the Guardian, no less): “Democracy and civil society need informed citizens, otherwise they will have difficulties in surviving”.

The West still nominally signs up to these ideals. Consider this from August 2020: “Covid-19 must not be used as an excuse to restrict citizens’ fundamental freedoms. Freedom of the press, of opinion, of expression, and of assembly are all universally recognised human rights and are guaranteed by the Zimbabwean Constitution. The government also has a responsibility to investigate and prosecute those responsible for violating human rights”.  The authors of this missive?  None other than The Heads of Mission of Canada, Germany, Netherlands, Norway, Poland, the United Kingdom, and the United States of America.

The insouciance of this hypocrisy is mind-blowing (though given the honest admissions of policy failures from the Norwegian government, perhaps they have a right to remain on the moral high ground).

An extraordinary development has been the entanglement of the big international tech companies in this web of deceit. In the name of clamping down on ‘disinformation’, companies like Twitter and Facebook have arbitrarily suppressed – and cancelled – voices that the overlords do not wish the masses to hear. These decisions have been vindictive as well as Kafka-esque: highlighting government-published data has been a particularly notable thought crime. A former President of the United States can have his Twitter account deleted, yet the Taliban are free to amplify their message on that same platform.  Facebook ‘temporarily allowed’ calls for violence against Russians. The mind boggles. These are just the bigger stories – the repression is far, far greater as it extends to a systematic evisceration of smaller voices that would otherwise contribute to balanced debate. The net effect has been an Orwellian shift of the Overton window: a 21st century Lysenkoism.

What is to be done? It is not clear who – or what – is writing the press barons’ script, and so it is difficult to know what one is up against. However, there are some chinks of light: on the ‘fool me once’ principle, many of those who went along with the narrative are beginning to question the serious inconsistencies in the official narrative. 2020’s dictatorial voices of doom now get a much more jaundiced response from the shop floor – this is a healthy development. A decentralised resistance has emerged, providing slightly more fertile ground for healthy discourse that could allow the scientific method to return to its Popperian roots.  We certainly need to improve on the status quo – it is hard to disagree with the BMJ’s view that evidence based medicine is broken.

And super-aggressive cancellation policies can only go so far – delete all your customers and you have no business. Large tech companies are subject to users voting with their feet, and are not entirely impervious to Deus-ex-machina events. David Thunder, a researcher and lecturer of political philosophy at the University of Navarra in Pamplona, who studies the “issues connected with the culture and institutions of a free and open society” and who was – of course! – deleted by Twitter only a few months ago, discusses this issue in his Substack newsletter: “Could Elon Musk Convert Twitter into a Free Speech Platform”? Now there is a thought. But the method by which you might read that article is newsworthy in itself – kicking Thunder off Twitter has made him invest in building up alternative methods of publication, a fine demonstration of why peer-to-peer communication platforms such as Substack are growing so rapidly.

We must not forget the misadventures of the last two years, but we must also make it less likely that are repeated. Society needs to be more resilient. It will help if we can dismantle the web of lies that is keeping full disclosure of the authorities’ Covid calamities from the general public.