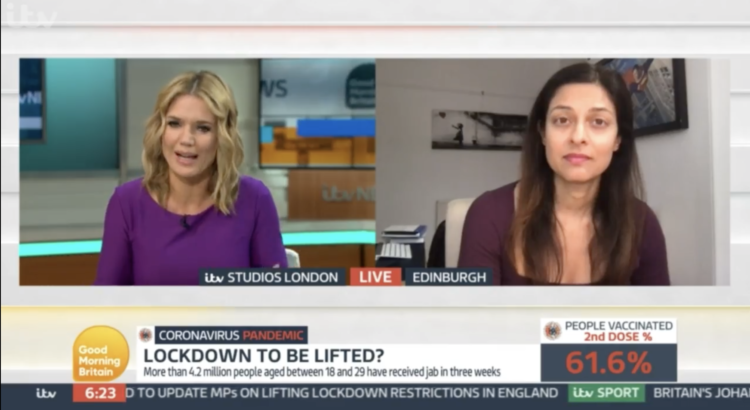 Roll out of COVID-19 vaccine to children is indefensible

On Monday 28 June, Good Morning Britain (GMB) interviewed Professor Devi Sridhar, who in HART’s view, was once again allowed to give out highly misleading information regarding the safety of COVID-19 vaccines in children. Professor Sridhar overplayed the risks of the disease in healthy children, while underplaying the known short-term risks of the vaccine. There was also no mention of the fact that we simply don’t yet have any medium or long-term safety data.

Professor Sridhar holds no medical qualifications. HART is deeply concerned at the lack of balance shown by GMB and the fact that someone who is neither a virologist, immunologist nor expert on the subject of vaccination is repeatedly given airtime to talk about vaccine safety.

The reports of adverse events that occur after vaccination are freely available for all to see on the American Vaccine Adverse Event Reporting System (VAERS) database. A quick search reveals a more accurate picture. Particularly striking are the large number of life-threatening adverse reactions. Many of them have not ‘recovered’ contrary to what Professor Sridhar states, with one example being 12-year-old Maddie De Garay who was a participant in the Pfizer-BioNTech clinical trial and has been hospitalised a number of times since receiving her second dose. There have also been alarming reports of cardiac pathologies, which is in line with the noted increase in myocarditis in young adults. And as mentioned in our video above, this 17-year-old athlete in the US ended up in hospital with two blood clots in his brain and one in his neck following vaccination — severe symptoms started 24 hours after his first dose of the Pfizer vaccine. While in Singapore, it has been reported that a 16-year-old boy had cardiac arrest 6 days after receiving his first dose of the Pfizer vaccine.

The VAERS system appears to have a consistent reporting lag of between 3 and 4 weeks, which means more recent adverse events may not yet feature.

13 year old found dead 1 day after (the dates reported here match the tragic case of Jacob Clynik – a teenage boy from Michigan who reported experiencing a post-vaccine reaction and died shortly after his second Pfizer dose.)

The roll-out of this vaccine to children at this time is indefensible. It remains inexplicable how the clinical trial ever managed to get approval from an ethics committee. The children who died as a result could never have benefitted from this experimental drug. Their parents were misled as to the relative risks of the disease, versus possible risks from the vaccine. They did not receive adequate information to enable them to give fully informed consent. If they had, would they have agreed to their child receiving the injection in the first place?