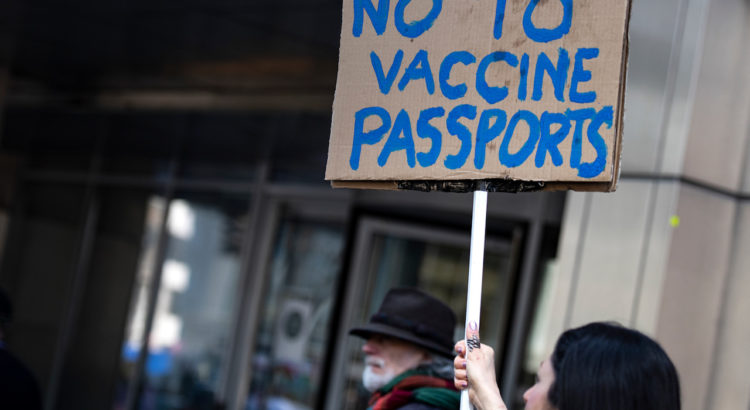 We are simply not a ‘papers please’ society

What is the point of principles protecting the rights of the individual if they can be undermined at the slightest hint of a possible perceived harm, or a small risk of such a harm? What if the proposed solution creates greater harm, or just a series of different harms?

These are complex matters, and require careful thought, debate and discussion. In a parliamentary democracy, for example, one might wish to publicly debate this in full and at leisure before considering a balanced proposal. One might take heed of parliamentary committees that have carefully considered the proposition and clearly communicated their concerns. One might openly and transparently share the governing body’s assessment of the costs and possible drawbacks, rather than wait for them to be leaked to the press. Nonetheless, if deemed appropriate, one might introduce any measures carefully (perhaps voluntarily), over time, based on clear and unequivocal evidence and with clearly defined objectives. Such an approach would surely be the most likely to succeed in the long run.  Objections could be countered; objectors might be mollified by measurable success.

It is worth deeply cogitating on this matter, but let us cut to the chase: vaccine passports are slated for introduction as part of the UK Government’s ‘Plan B’ for the coming winter, to be introduced as a contingency if “further measures are necessary to protect the NHS”. The vaccine mandates may result in up to 100,000 job losses across the NHS, largely of people – our erstwhile heroes and heroines – who have worked for months on the front lines and who are most likely to have natural immunity from repeated exposure to the virus.

Putting aside the matter that the NHS is there to protect us, not the other way round, it is in principle a laudable aim to ensure the NHS is optimally equipped to tackle any winter challenges. But let us interrogate these ‘measures’, and the assumptions they are based on. After all, ‘three weeks to flatten the curve’ ended up being a lot more than that, as did this statement by the Vaccines Czar Kate Bingham in late 2020: “There’s going to be no vaccination of people under 18. It’s an adult-only vaccine, for people over 50, focusing on health workers and care home workers and the vulnerable”.

The UK Government’s Covid-19 Response Autumn and Winter Plan makes the following statement to justify the introduction of vaccine certification:

“Vaccines reduce the likelihood of someone becoming infected, and, therefore, vaccine certification reduces the risk of onward transmission if an infected person does enter a venue”.

This is a dangerous assumption, and it turns out to be false, as reported in recent UK Health Security Agency’s Vaccine Surveillance Technical Reports. Similarly this Swedish study in the Lancet finds minimal to negative vaccine effectiveness. finds similar.There is no need to go into detail here about the convoluted efforts to explain away this inconvenient truth, but needless to say the attempts to do this are getting increasingly absurd.

Vaccine certification — which will not recognise natural immunity from past infection — could therefore actively exclude those least likely to spread the virus and ensure that so-called ‘Covid-safe’ events are in fact the complete opposite.

The creation of a coercive framework (the imposition of segregation on society) applies pressure on individuals to participate, and makes it almost impossible for a patient to give informed consent. It is entirely possible that people who have been given Covid vaccines have suboptimal immune responses to future exposure to SARS-CoV-2 variants — those who judge their risk from Covid-19 to be small might well not wish to run the gauntlet of an unnecessary vaccine. Every adverse effect caused by a superfluous — yet coerced — vaccination will hang like a millstone around the neck of ‘The Science’, undermining trust in health authorities for evermore. Article 6 of the UNESCO Universal Declaration on Bioethics and Human Rights states that: “Any preventive, diagnostic and therapeutic medical intervention is only to be carried out with the prior, free and informed consent of the person concerned, based on adequate information. The consent should, where appropriate, be expressed and may be withdrawn by the person concerned at any time and for any reason without disadvantage or prejudice”. Yes, without disadvantage. Those that are tempted to state that this would never happen here should acquaint themselves with recent developments in the rest of the Western world.

Thus the proposed measures in the UK Government’s Plan B for vaccine passports are totally flawed, unethical, are based on unsound science and would be highly counter-productive. In fact, a not dissimilar conclusion was reached by academics in an article published in the journal Vaccines in August 2021: “Control measures, such as domestic vaccine passports, may have detrimental effects on people’s autonomy, motivation and willingness to get vaccinated”. The authors emphasise what others might call common sense, namely “providing a caring culture and meaningful rationales for a behaviour, rather than applying pressure and external controls”.

Objections are not being countered, and objectors are not being dealt with reasonably. These UK Government vaccine passport proposals are a coercive injustice wrapped in a totalitarian travesty inside a fundamental wrong.

These proposals are not in the best interests of UK citizens. It begs the question — cui bono?